The term Influence refers to the measure of control the Sansha Nation has over a particular constellation. When the Sansha have invaded a constellation the influence meter will be full.

When the Sansha are invading a constellation, the following penetrates or “incursion affects” will occur:

If capsuleers stop defending the constellation against the Sansha's forces, then the attacking forces will regain their influence over the system.

If the Sansha's Influence over the constellation measures greater than 20%, the FC will require you to fit for High Influence! This is to compensate for the increased damage that you will take while fighting the Sansha.

The Graphic below indicates the changes that you must make to be safe under High Influence fleets!

You have enough EHP, you should not need to refit! 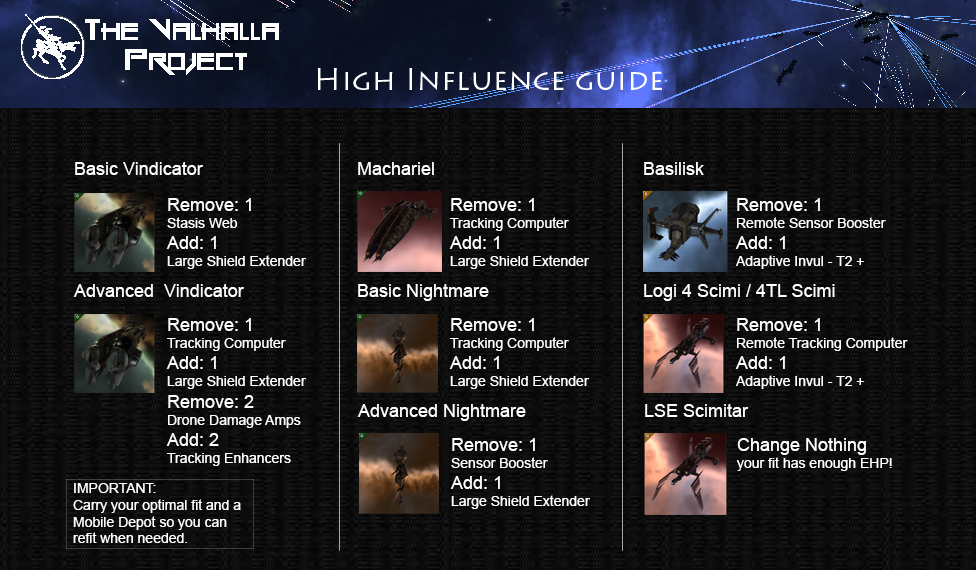 When Should I fit for High Influence?

You may link us up to four fits, so if you only fly with us in two different ships, feel free to link both of those ships with their normal and high influence fits. Put in the Comment to the FC section what fits are normal and what ones are high influence.

Going Back to Optimal Fits

When the danger has passed and the fleet is no longer to fly under High Influence conditions, the FC will ask you to switch back to your optimal (normal) fits.

If possible you should fly with a mobile depot and your spear mods so you can just change in space without having to dock. However should you not have your modules with you, the FC will give you time to head to the nearest station or citadel to change your fit!