While the newbro guide is aimed at newer pilots or returning pilots that want to refresh their memory, this guide is made for logistics pilots. A good logi squad is the backbone of every incursion fleet, good logi allow us to operate safely and efficiently, bad logi force us to slow down and invite more to make up for the lower performing members. TVP uses two types of logi ships, namely the Scimitar and the Basilisk. For information on required skills click here. For Skill plans click here.

The following steps should be taken as soon as you are invited to fleet.

Once that's done, just follow the usual steps to get on-grid with the fleet. Warp to the FC twice and ask for gate status.

Do this while in warp to the site!

Do this every time you land on grid!

Do not activate all of your reps at once on someone who needs reps. Activate them with a slight delay between each rep. This allows for reps to continuously land in a nice stream as opposed to in one clump.

It's very important that reps are staggered on Logi who take agro since they have very little buffer and the Sansha alpha can eat straight through their shields if reps don't land quickly.

It is imperative that you lock all shield broadcasts as quickly as possible so that you can catch the player taking agro, and catch any nasty agro switches. Please make sure you're locking them all up! 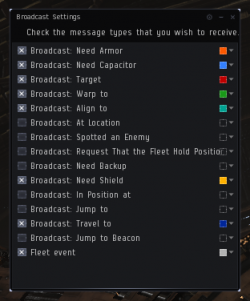 When a player becomes stabilised, please slowly remove reps from them, whilst ensuring that they still remain stable. This allows the freed up reps to be used for the next player that takes the agro switch immediately when they broadcast. If the player starts bouncing as you remove reps from them, you can always put one back on. Remember, shield boosters transfer shields at the beginning of their cycle.

Watch the Sansha's red lasers and where they go. If someone doesn't broadcast on time call them out and broadcast them as a target. You can save lives! This takes some practice but it is a super important skill for all logi pilots to develop, and FC's will be more likely to invite logi they know are good at following lasers when they are struggling with the current logi squad.

Lowest incoming DPS of any of the sites we run, but that's not an excuse not to pay attention! FCs may run logi light for TPPHs which means you still need to be concentrating

Extremely heavy incoming DPS when the waves fully spawn, in a preload all of this agro will hopefully be concentrated on the AAA